There has been an interesting and good natured stoush this week over the use of the F word in a job advert. Clearly this has been quite polarising for a few people.

In one corner is Troy Hammond, a recruiter/sourcer of some repute now plying his trade alongside Kirsti Grant at Vend. In the other is Ross Clennett, a respected commentator on all things recruitment from across the Tasman.

Ross spotted the advert for Vend’s VP of Global Marketing which points out what an effing great company Vend is to work for.  Ross’s view is simply that whoever wrote the job ad overstepped the mark. In his latest blog post, Ross talks about using the F word in the right context and suggests a job ad isn’t the right context. He describes it as “look-at-me showmanship” and says it’s neither clever, funny, appropriate or necessary. 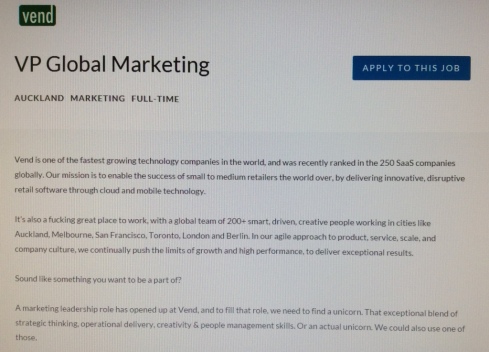 In response, Troy has penned a post of his own defending Vend’s position. He suggests Ross doesn’t get it and that dropping the F bomb is part and parcel of working at Vend on a daily basis. He talks about authenticity and values (“just fucking do it” is one of Vend’s values) and that, as a start up, they are somehow thinking differently from the rest of us. If people are put off from working at Vend because of the F word, then “we don’t want them anyway” seems to be the gist of it.

I wrote a post last May after attending the IT18 event in Auckland at which I suggested that using the F word in your company values was far from edgy, and actually offensive to some people.

Now let me say I have no problem with dropping the F word at work in the right context and with the right people. Hell, I work in HR and sometimes even the C word is the only appropriate way to describe some people I have come across! I occasionally use the F bomb in my blog posts and on social media so I am not being all self righteous here.

However, I find myself of the view that using it in company communications or branding material smacks of lazy and unprofessional behaviour. No doubt the good people at Vend (and they are good people) will simply say they don’t give a toss because everyone thinks they are cool. Maybe I’m just not young enough to “get” this stuff anymore, but I have always believed the pen is mightier than the sword. If you can’t get your point across in print without resorting to four letter words and the risk of polarising people then you shouldn’t bother. 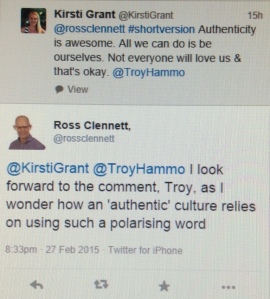 Just a thought, but will “just fucking do it” help Vend when somebody one day takes them to court for bullying and harassment, or when a staff member gets caught with their fingers in the till, or when they are battling with regulators?  Will people not perhaps point to that and say their culture encourages people to get the job done whatever the cost to others and the law? And they will.

Vend are very proud of their culture and they clearly attract a certain type of person to work there. NZ loves a good start up success and we all want to see them do well. But wouldn’t you just love to see them market themselves in a really clever and inventive way which is more typical of their innovative culture as they continue to grow? They are better, dare I suggest, than behaving like an embarrassing child who has just learned their first swear word.

Time to stop dreaming of unicorns and grow up? Something perhaps for their new VP of Global Marketing to get stuck into!

6 thoughts on “A culture to swear by”

Follow Up the Down Escalator on WordPress.com
Join 313 other followers