We kick things off this year with a cracking post from the wonderful Hassanah Rudd (@hassanahrudd). Hassanah describes herself as “mother to 3 kids, techy geek and general loud Redhead.” She is also a highly experienced, driven and successful Senior Talent Sourcing Manager, with over 15 years in the recruitment field. Always #NZREC at heart but moved to Sydney in early 2014 where she works in a combined role of GM Candle NSW and Talent Acquisition Manager (one of her big passions). Commercially astute, she finds time to serve on two Boards and is a member of the New Zealand Institute of Directors.

Lessons from my Mum
Some of my first memories as a child is of looking at many feet and shoes whilst big people talked over me, mostly in an animated fashion.

This is possibly where my love of shoes germinated.

I learnt the word quorum quite early. I was a child that attended a lot of committee meetings, was used to days when the phone rang off the hook at home. Once my Dad had to unplug it late at night as it just wouldn’t stop. I saw my mum on TV, saw her in the newspapers, went on marches, and held banners.

I was a child of a community activist. All my life my mum has taken “making a difference” more as a compelling order as opposed to a suggestion of warm fuzzies on a “to do” list. 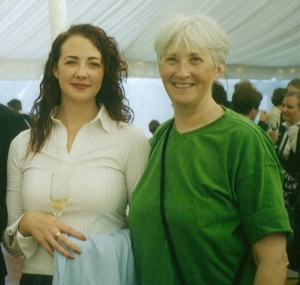 Over the years my mum pushed, argued, petitioned, marched, galvanised communities and made a difference. There have been different causes.

A classic from my youth; Mum was fed up with the streets round our house being such a mess, so she organised a community clean-up crew. She did such a good job of it that the council employed cleaners went on strike in protest! (It was the 70’s)

The running theme through the years was in maternity services lobbying and advocacy work and that is what got mum on TV and the phone running hot. Woman calling in tears to say “yes that’s what happened to me” “thank you for getting that changed”

You’d probably be surprised to know that the greatest degree of change in maternity services was driven by a bunch of determined vocal women. Usually it was a very small bunch, but over time it got bigger, and bigger and they made such a sustained attack on “the way things are done” that bit by bit the changes they fought for … well, got changed.

If you think your ability to be with your partner when she gives birth is because the hospital thought it was a good idea … nope. That would be people like my mum you need to thank.

Bet if your child got sick enough to have a hospital stay the thought that you wouldn’t be able to stay with them would be unthinkable … yes? Well guess what, women like mum made that possible.

So I learnt valuable lessons growing up. One, always have enough biscuits for committee meetings and two, even if it seems like an uphill battle and even when it looks like you will never change things, you will. It just may take a while – it may take more people joining in – it may be the changes are so subtle you don’t see them. But if you keep going it will happen.

It may have a price you have to be willing to pay; time, emotions and sometimes financial. But with enough determination you will make life different and better and interestingly – somewhere down the track – people will assume that’s it’s always been done that way. The change you fought so hard for will be taken for granted. You will know though – you will know what it was like before.

I’m telling you this because amongst us are the outliers, the disrupters, and the people who want it to be better and Not Like This. We are HR, we are Recruiters, we are lots of people.

We look at the world and see it as a place that should not only be better … but we have motivation to actually try to make it better.

Not too long ago I read a raw and truthful post from Amanda Stirling. I heard and felt her cry of frustration.

But I want to give heart to Amanda and those like her. Being the catalyst of change is not much fun sometimes. And it can seem less bloody painful to just stop and go with the flow of how everyone else sees the world.

Problem with that is … when you are intrinsically built to make things better you can only do that for a short amount of time before an injustice sets you off again.

In a way it’s a bit like being the grit in a shell, after enough time a beautiful pearl is created and then you are claimed and wanted … and then everyone wants one.

Amanda, you are on the way to being a really big pearl so keep going.

My mum taught me to fight for what you believe in, even when it costs you, that sometimes it’s just one person’s voice that makes a change. That accepting the world the way it is ok, but when you know it can be better … stop waiting for someone else to do it.

Actually YOU do it.

This is how change happens.

You will make enemies, some people will kick against it and occasionally vilify you. But take heart, because your change is positive. Others may see it as destructive. And it is to the old way, but nothing in this world changes unless someone moves the goal posts … and just every now and again, they need shifting outside the stadium.

I look back over all the things my mum did – and actually if I’m open here – even at 70 plus still does. Her latest was as part of the world’s oldest Hip Hop crew – (Hip Operation Crew) – which she pulled my dad into. Now she is in the Guinness Book of Records, went to Las Vegas to compete in the world hip hop competitions and is in a film about it all.

Lesson from my Mum; Age is no barrier.

So the last lesson from my Mum
Go out and be unreasonable, because the world needs you.