Ok, admit it. You’ve clicked on this post out of interest. Sucked in by the provocative title. I know what you are thinking – has he lost his mind? Where’s he going now? Has he crossed a line?

You want an explanation? Well, let me start by saying this is not a cheap and tacky attempt to boost my blog view stats. Although ironically it probably will because sex sells as they say.

No, It was that moment when I realized someone was writing the sort of blog I would love to write. Only way better than I ever could. Let me introduce you to the wonderful Gloria Ramsbottom-Lemieux.

“Gloria” started following me on Twitter a week or two ago. She works in HR, she is Canadian. That’s good enough for me so of course I followed back. Then this morning perusing my Twitter stream over breakfast I saw this:

“I get sexually aroused by the term HR business partnership.”

It made me laugh out loud. I assumed she was being ironic so responded with “show me the ROI always does it for me.” It got a prompt re-tweet. A meeting of (probably grubby and like) minds. 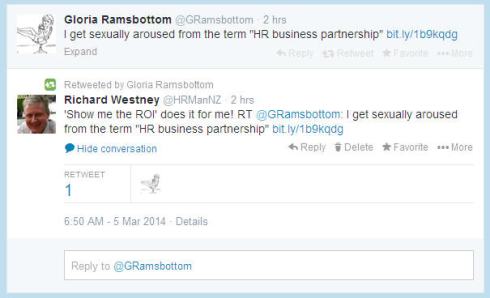 Then I clicked on her links. What I discovered was a wonderful series of satirical, sarcastic, bitingly spot on observations about life in post-modern HR. She describes life in an organization that is a melting pot of all those organizations you have probably ever worked in and wished you hadn’t. All those crappy jobs and pointless tasks/projects that drive you up the wall. The HR Manager from hell!

Gloria seems to have been posting for over a year and, according to a recent post by the (male) author, has been taken seriously by some including being expelled from some LinkedIn groups for “giving lip.” He’s obviously having a pop at the over-complication of HR and the many hollow phrases we utter all the time. A book may be the final outcome and I do hope so. If it’s half as good as Who Moved my Blackberry it will be worth waiting for.

Whoever you are Gloria, thank you for making me laugh.

So all this of course BEGS the question. What are the things in HR that get you sexually aroused? Go on, I dare you!

By the way, I did once work with someone who swore a good dismissal gave him a ……well, let’s not go there.

20 thoughts on “Does working in HR make you sexually aroused?”

Follow Up the Down Escalator on WordPress.com
Join 312 other subscribers