Last Thursday was apparently Equal Pay Day. No, I had no idea either. But apprently it marks the extra days from 1 January that women have to work to earn the same as men did the previous year. What? I may well get shot down in flames here but this is a subject that irritates me greatly. There are lots of reasons why the so called experts believe there is a widening gap between what women and men generally earn. It’s not discrimination. Careeer choices anyone? Late last year, recruitment company Robert Walters published a study on gender discrimination and how it affects professional’s career choices. Now, I have to confess I haven’t read the full report and I’m sure it’s a well researched and written study. What irked me though were the headlines it generated and the issues they focused on.

The main thrust of it was that “most Australasian professionals believe gender discrimination still exists in their workplace.” Let’s just think about that sentence for a second. What we are saying here is that people generally feel that decisions are made about appointments, promotions and salaries that use gender as a key driver. Some 75% of those surveyed apparently believed that statement to be true. Further, 55% believe it is more difficult to be successful as a woman and a whopping 48% believe women still receive less pay than their male counterparts. 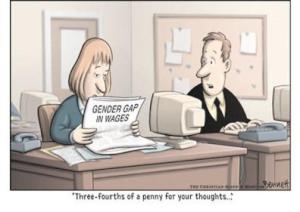 A recent New Zealand government report on tertiary study also apparently confirmed a gender gap in graduate salaries if you believe some of the headlines. Read the report and that little fact barely warrants a mention but people don’t look below the headlines for the underlying reasons do they? The perception is therefore cast that a male graduate doing the same job will be earning slightly more than a female colleague doing the same job. This of course is complete nonsense as any graduate employer will tell you.

One of the joys of working in HR is that you get to see what everyone else in the organisation (including your own colleagues) is earning. This isn’t always a joy of course when you realise the idiot manager who couldn’t manage his way out of a paper bag and whose mess you are constantly clearing up earns 20 grand more than you do! If anything, HR people tend to be the poor relations in the corporate world in terms of salary packages. I’m not sure why that is. Maybe we are just paid as a profession relative to our perceived value?

But that’s a whole other issue. My point here is that I can’t recall feeling in any organisation I’ve worked in over the last 20 years that there is a gender gap in terms of salaries or gender bias in promotion decisions. When I look at teams of people all doing the same job, whatever the industry or profession, I’ve always seen a fair mix of salaries based on experience and performance and as many women progressing as men.

I don’t doubt that in some areas of the workplace there are sexist and discriminatory practices still going on and you do read about them from time to time. But these are “professionals” in the corporate world we are talking about here. Not cleaners, mechanics and car salesmen.

The reality as I know it is that females earn the same as males for doing the same job. They have just as much chance of getting promoted as their male colleagues and the only barrier to their own success is their own ambition. To quote my last post, its 2013 not 1973. If it were any different, my job would have a very different focus.

Is that too simplistic a view? Does anyone feel I’ve got it badly wrong? If so, tell me. As always, I’m interested in your thoughts.

One final thing, (and no apologies for this as it’s my blog and I can include what I like!), if you have read and enjoyed my posts I would appreciate your indulgence and support. This coming weekend (9/10 March) I am taking part with my wife and daughter in our local Relay for Life. Four years ago my wife was diagnosed with the most aggressive type of breast cancer. She was lucky. She caught it early and survived after a full course of chemo and radiation treatment and thanks to some wonderful support from the staff at Wellington Hospital and the Cancer Society, and also to a drug called Herceptin that was not widely available to people even five years ago. Had we still been under the previous government when she was diagnosed, we would have had to sell the house to afford the treatment. I’m not knocking the politicians here, just pointing out it is a very expensive drug and a lot of research went into it.

Relays for Life are wonderful events and raise a lot of money for cancer research while remembering those who weren’t able to beat the disease. Incidentally, we’ll be lighting a candle for my wife’s then company HR Manager who sadly succumbed not long after my wife was diagniosed. It’s obviously something that means a lot to us as a family and is a chance for us to give back. If you can spare a few dollars, pounds, Euros, yen whatever, then please go to the link below and select Relay for Life Kapiti 2013 and choose Compass Kapiti as the team and sponsor me (Richard Westney). We will be walking through the night as part of a team of about a dozen people. Your support in helping fund the ongoing research into this awful disease is appreciated.
http://www.relayforlife.org.nz/index/donation

10 thoughts on “Friends with benefits – the gender gap myth”

Follow Up the Down Escalator on WordPress.com
Join 313 other followers